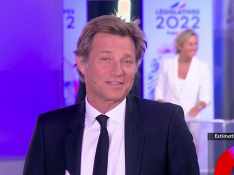 Despite his long and happy experience as a journalist and presenter, the star of France 2 did not escape the pronunciation accident during the election evening of the first round of the legislative elections. He thus seriously stumbled on the name of one of the candidates for this June 12, 2022.

Accustomed to the post of election evening presenter on France 2, Laurent Delahousse is no less infallible. The 52-year-old journalist had great difficulty correctly pronouncing the name of one of the legislative candidates during the program covering the results of the first round of these elections. It is the former Minister of Sports who was the victim of the blunder of the animator-star.

After questioning Jean-Michel Blanquer, in charge of Education before the cabinet reshuffle, about his bitter defeat in the fourth constituency of Loiret, Laurent Delahousse also wanted to know more about another former minister of the Jean Castex government. , that of Sports Roxana Maracineanu, qualified in the second round in the 7th constituency of Val-de-Marne (with only 23.7% of the vote). However, when he has to pronounce his name, the presenter has many difficulties: “We also wanted to know the former Minister of Sports Roxana Mariça…neanu…Mari…çaneanu. Well, that’s how it is. I’ve never screwed up in life, I have to screw up tonight“, he said with a big smile with a hint of embarrassment.

The end of the electoral evening was exhausting for the companion of Alice Taglioni who also stumbles on the status of Rachel Kéké (in the lead with 37.2%), ex-housekeeper who is ahead of Roxana Maracineanu: “Spokesperson for uh… for the chamber precisely, for the striking chambermaids…

VIDEO – Laurent Delahousse: what does Florence Kieffer, the mother of his daughters, look like?

Anne-Sophie Lapix faced with a big blunder: she must apologize live!
“Sunday evenings are hard”: Lorie separated from her daughter Nina, difficult time…
Olivier Véran stuck by Léa Salamé and spat with Adrien Quatennens, restless evening in We are live