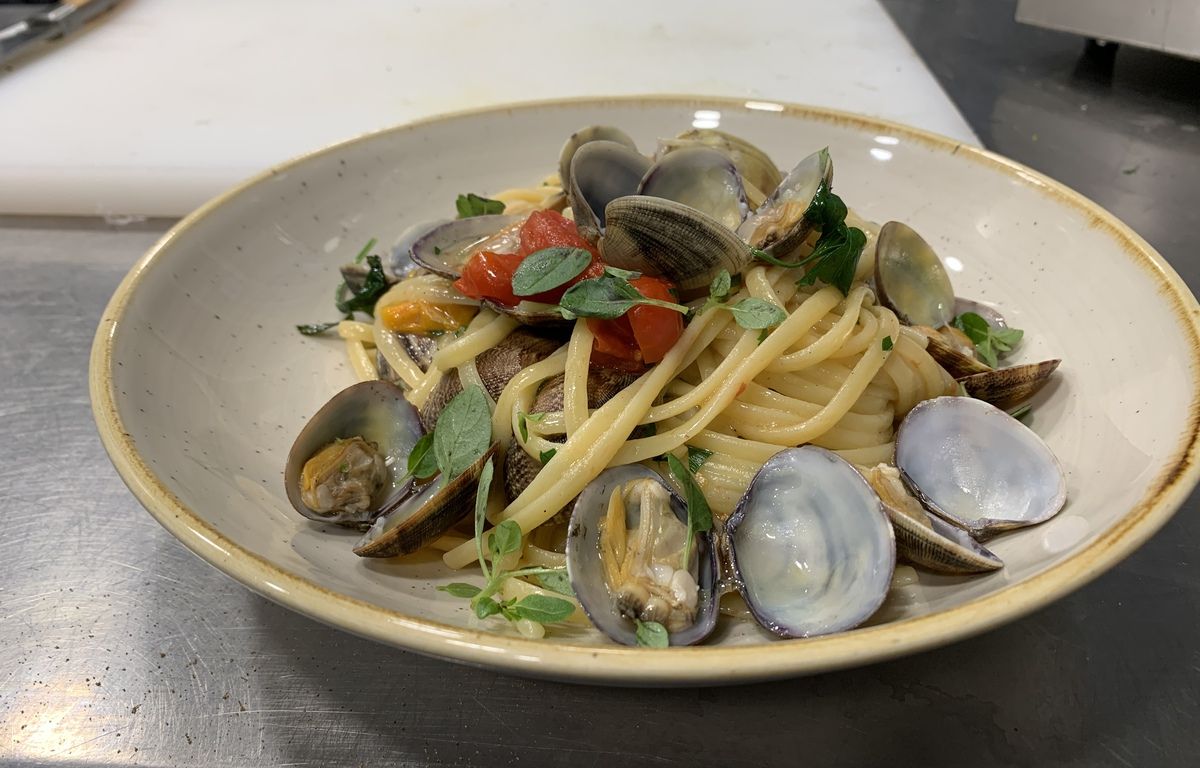 The French love pasta: 500,000 tonnes of it are consumed every year and, every week, through its “Pasta così! », 20 minutes teaches you how to cook an original recipe well. Today, Italian chef Denny Imbroisi is in charge of the kitchen. The former Top Chef has three addresses, Ida (for signature cuisine), Epoca (more trattoria) and Malro (more broadly Mediterranean). This is where we first tasted his linguine alle vongole, succulent pasta with clams, very creamy and iodized.

A classic in Italy, which Denny Imbroisi did not fail to include the recipe in his book A table in the sun (ed. Webedia Books). “There is nothing very complicated, assures Denny, but it requires a certain timing and real coordination. First, the choice of ingredients. Pasta, of course: 120 grams per person for a main course. The chef’s preference is for linguine, a sort of flat spaghetti, which he will choose with the very rough grain, “if possible from Gragnano, in the Naples region”. And the clams that you have to know how to get rid of their sand. “If you’re at sea, rinse them with sea water,” advises Denny Imbroisi. Otherwise, take a liter of water and add 330g of salt to it, because seawater contains 33% salt. The vongole, we are going to rub them well three times in this water, rinsing them each time under a stream of fresh water and plunging them back into this salt water. “The salt water is to encourage them to open up so that they empty their sand. “Be careful, warns the chef:” If a vongole remains closed, the sand will only come out during cooking and it will be a disaster for the sauce. » Denny’s trick: tap each clamshell on the work surface to check that it has released its sand. If there is a full sound, it will have to be put aside, because a vongole emptied of its sand always has the same resonant sound. »

We will not go back over the pasta recipe, detailed in the video shot by 20 minutes. But for those who haven’t paid attention, we will recall some tips that Denny recommends for all pasta.

The rule of “one, ten, a hundred”: for a liter of water, add 10g of salt to cook 100 grams of pasta. “With this, you’ll never have a problem with the amount of salt again,” laughs the chef. The other rule is to ensure that the total duration indicated on the package is the addition of a start of cooking in boiling water and an end of cooking in the sauce. In the case of linguine alle vongole, it’s seven minutes in boiling water, then five minutes in the clams. The vongole will have previously been cooked for two minutes, covered, in a little olive oil, a clove of garlic, a few sprigs of parsley and a glass of white wine.

A small glass of cooking water

Another recommendation: Denny Imbroisi drains the pasta without rinsing it, since he will then finish the cooking by adding a little starched water. “Always keep a small glass of pasta cooking water, it’s essential. This is the trick that will help you to have creamy pasta without adding butter or cheese, even if obviously, in seafood, we do not add cheese. We are going to cook the linguine again with the juice, with the clams, with the tomatoes, with a few ladles of cooking water until they are cooked for twelve minutes. Twelve minutes is what it says on your package of pasta. We in Italy always cook a little less because we like al dente pasta, which makes it more digestible. »

Before arranging the pasta in a dish, Denny adds ground pepper and a drizzle of olive oil to it, then mixes it well by sautéing it in the pan to emulsify it, as can be seen in the video. “It will integrate air, cool them,” says the chef. It is therefore necessary to hurry a little, without forgetting to add some shells, previously set aside, for decoration.